Sight & Sound Services started in early 1992 as a partnership between a soon to be college graduate with a Broadcast Media degree and his friend that was always the “AV nerd” with the ability to take an OK picture, but no real background in video.  With limited funding and the technology of the time the finest S-VHS gear that we could afford was found, gathered, begged for and placed into service.  It wasn’t long before the team was producing commercials that would be broadcast on cable insert in the Hood River and The Dalles market.  News coverage also brought in a little money, mostly with local spot stories and the occasional feature such as climbing to the top of Mt. Hood for KOIN for a story on what it takes to climb the mountain.  The floods of 1996 saw our first worldwide news video with CNN and others picking up dramatic shots of flood damage in our area. 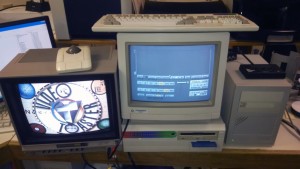 Here’s our original Commodore Amiga 4000 Video Toaster Flyer. Amazing how times have changed! Check out that huge 15 inch monitor! The video drives and tape backup are on the right… Over $7k for those 8 GBs of space….

Someplace in there we purchased our Amiga computer based “Video Toaster” system, giving us better graphics and switching capabilities along with the beginnings of 3D animation.  In looking back, some was disturbingly not so good, and others was pretty amazing for the times.  When Newtek, the makers of the Video Toaster, came out with the “Flyer” add on we jumped early.  This system allowed us to actually edit video inside the computer!  It was amazing, it was earth shattering, it was state of the art and not $40,000 like the Avid systems of time.  It wasn’t cheap though.  It required HUGE FAST hard drives.  The most we could muster was enough to get a pair of 4GB hard drives and a tape backup system.  Those hard drives cost over $7,000.00!  Amazing where it has come!

Times changed, the educated partner moved on and so did Sight & Sound.  Trying to walk the fine line of equipment that was “good enough” for our clients without being so expensive as to be cost prohibitive we moved on to DVCam.  Computers changed and we switched to the PC format since Apple was going bankrupt when we had to make the change.  We purchased the PC version of the Newtek Video Toaster and still use it for certain projects today.  We edited a lot of projects on Speed Razor and eventually ended up using Avid Media Composer on a PC.  High Definition came along and we followed suit eventually purchasing our Sony EX3.  And now times are changing faster than ever, and we are working to keep up, not quite on the expensive “bleeding edge” but close behind!  We can now offer aerial video with a Unmanned Aerial System and have a fantastic brushless gimbal system for amazingly smooth handheld video. 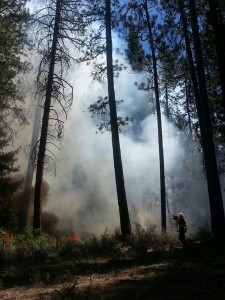 Sight & Sound Services owner Pat McAbery operating a Glidecam on the 2014 Bridge 99 Wildland Fire. Yes, he has on a shelter, gloves, nomex and LCES is in place. (Trust me, if you don’t know what this means, there are people that do!)

We have served innumerable clients down through the years, mostly with small projects.  If we have a crew of three on a job it’s feeling pretty big!  Our main clients have been government agencies, such as the US Forest Service, The Wildland Fire Lessons Learned Center, the Office of State Fire Marshal for Oregon and many others.  One of our specialties is making people that aren’t used to being on camera feel comfortable with the process and give a good interview.  We try to make everyone we are working with feel at ease with the project by listening to their needs and ideas, explaining in non-technical talk how we are going to proceed and communicating with them throughout to lessen the anxiety, and being very open about how the project is going, both good and bad.  Most of our clients are returns, so that says a lot right there.  We do our best to make the daunting process of creating a video as fun and inclusive as possible!

We are located in a beautiful mountain setting, so close to Mt. Hood, Oregon that we can’t see the mountain, the hills are in the way.  We are an easy hour from Portland and close to the ever amazing Central Oregon.  Lots of lodging options surround us along with great food from a variety of restaurants.  We think that we are in a great place to serve your media needs.  If we don’t have the equipment in house we can definitely get it in short order!

Pat McAbery, the owner of Sight & Sound Services, has been a professional firefighter/paramedic for over 25 years, with 10 years as a volunteer prior to that.  Along with regular firefighting and medical duties he is also part of a regional Urban Search and Rescue Team which means he maintains additional skills such as high angle rope rescue, confined space rescue, structural collapse, trench, heavy equipment extrication and more.  So, as an added value on your video projects you will always have someone with a lot of experience in dealing with real emergencies, the kind that make on set emergencies seem kind of small.  He strives to be up to date and keeps trying new things to keep his video productions fresh,

Testing an upload option for videos.